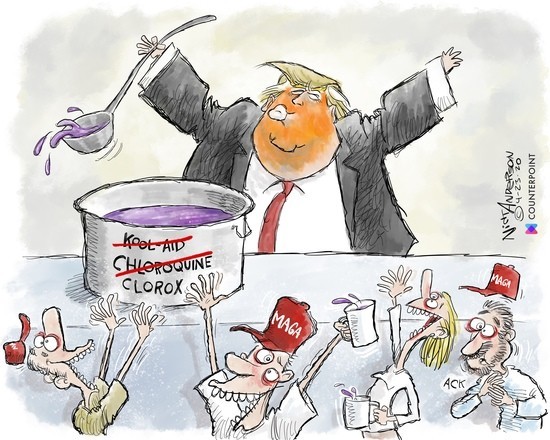 In terms of amusement that is. We could have also called it ‘biggest misses’ in terms of sensitiveness or policy. We should not be too hard on Trump on handling the corona virus outbreak as it is improvisation for any world leader. And some tend to be a bit better at that than others. Without making this a political story, it is worth noticing that all the populistic world leaders are not doing great in containing the virus. Leaning heavily on economic growth for success, they are finding themselves between a rock and a hard place. But for this article we keep it light. Let’s dive into some of Trump’s most memorable and painfully remarks over the last few months:

It should be no surprise that there is a lot of mud throwing to be done between the two presidential candidates. Biden blames Trump not to wear a facemask in public and Trump, well, he replied that Biden should not be a hypocrite as he was spotted with his wife inside his house not wearing a facemask. We feel that Trump might have missed the point on facemasks.

This is probably the most memorable of them all. Trump has heard how the virus dies when faced with heat, strong uv light and detergent. ‘That’s it?’ thought Trump, ‘then why don’t we just inject light and detergent into the skin? See, this is why I’m president. No one else thought of this.’ And so, in response to the question if any positive was at the horizon on national television, Trump declared to the world that he just came up with some revolutionary plan. We can only imagine how the viewers must have felt when their leader announced his plans to the world.

To golf or not to golf

With the Ebola outbreak, Trump tweeted that Obama should not have been playing golf instead of managing the crisis. Not surprisingly, the irony that was casted upon Trump multiple times for him playing golf during the Corona crisis was not spared. This, we feel, is the least of his misjudgements. A man has to relax sometimes and if golf is his medicine of choice, so it be.

It’s the beginning of March and Trump makes the prediction that the virus will miraculously ‘vanish’ if the temperature gets higher. By April the virus would globally stabilize, to be as good as gone in may. We now know that this prediction didn’t age well. And yes, that is an understatement.